The Autonomous Intelligent Systems group conducts research in the areas of cognitive robotics and computer vision.

Cognitive robots represent the next step in the fusion of machines, computing, sensing, and software to create intelligent systems capable of interacting with the complexities of the real world. They are the physical embodiment of machine intelligence. Key challenges in constructing these robots include the systematic treatment of uncertainties, the modeling of the environmental state, the coordination of teams of cooperating robots in dynamic environments, the interaction with humans, development, and learning.

Examples for cognitive robot systems are humanoid robots, which resemble the human body plan and rely on human-like senses. Our robots are playing soccer in the RoboCup Humanoid League and perform domestic service tasks in the RoboCup@Home League. They are also used for intuitive multimodal communication with humans in a museum tour-guide scenario.
Other cognitive robots we investigate include autonomous micro aerial vehicles (MAVs), bin picking robot manipulators, and exploration robots. 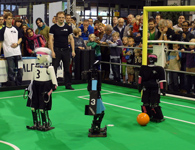 One example for such a deep learning architecture is the neural abstraction pyramid, which resembles some aspects of the human visual system. This hierarchical recurrent artificial neural network can be trained to learn e.g. face detection, image reconstruction tasks, and semantic segmentation. 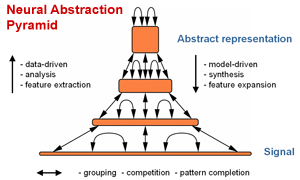